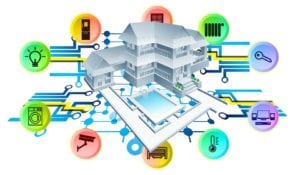 “Tiny robots-mice poured out of the tin in the wall. In all the rooms there were small bustling metal and rubber cleaners. They knocked on the chair, rolled their bristly rollers, eroded carpet pile, quietly sucking the hidden dusts. Then, like unknown aliens disappeared, they rushed to their asylum. Their pink electric eyes were extinct. The house was clean. “

Do you know these lines? This is an excerpt from the translation of the story of “There Will Come Soft Rains” by American science fiction writer R. Bradbury half a century ago, in which an empty automated house keeps a clean eye and maintains a timetable set by the masters.

What is a smart home?

In the 1950s, such “intelligent” homes could only be dreamed or read in popular science magazines and books. Conceptual developments of a comfortable automatic dwelling, if any, were called differently. Until the public appearance of the term “smart home”  remained for about 20 years.

Motion sensors, warm floors, air conditioners, ventilation systems and boilers worked properly, but on their own, without knowing the existence of each other. It is worth saying that a person had to take care of the comfort of his home. If the window was opened and the conditioner was turned on, then the temperature and humidity should be adjusted manually, checking the readings of the street thermometer with the room.

The fact that the house can be smart, the mass media of the middle – the second half of the 20th century, also knew well how the black-and-white TV design engineers knew that they would later release colored models. Meanwhile, without public technology and open standards, at least some mass and inexpensive “smart home” and speech did not go.

By comparison, the clever house of American billionaire philanthropist Bill Gates, designed and built in the late 1980s, cost the well-known entrepreneur a fabulous $ 63 million.

In 1975, confusion with the standards for data transmission for home systems began to vanish. The public was presented with the X10 protocol, the first open industrial standard for data transmission in home automation systems. It was a communication protocol for electronic devices, operating at 60 Hz and 110 V in an ordinary home network. This somewhat limited the market of countries where compatible devices could be used. In the Soviet Union, they would certainly not earn.

For the future owner of the home automation system under the X10 standard it was enough to purchase the necessary modules, plug them in sockets, and connect home appliances to their home network through them to control them freely. Of course, at that moment, the introduction of modem remote control modules or high-speed control centers with programmable scripts could not occur.

Only in 1978 the first X10 modules appeared on the market: a 16-channel command console, a module for controlling the lamp, and a control unit for the electric appliance. Subsequently, module switches and timer module appeared. Ideally, it is precisely 1978 that is considered by many historians as the starting point in the history of home automation and smart homes. At the same time, the purpose of the first home automation systems was precisely automation, not the creation of scenarios for management of engineering communications and utilities of a residential building.

In the early 1990s, the first commercially successful solutions appeared, and the young market of home automation systems flooded numerous companies that offered a variety of typical solutions, called turnkey. Such an upsurge was caused by the emergence of a new international standard of the electronic system in 1992, which regulated the issue of equipment for “smart homes”, which made it possible to release systems and individual products by the forces of virtually any commercial company or firm.

The new systems have gone from simple light automation or household appliances and offered scenarios, for example, a “sleep” scenario, when the power of domestic lamps was lowered, electrical appliances were switched off, except for the most important ones, for example, the refrigerator, and the air conditioner was switched on in the bedroom, which lowered the temperature to a comfortable level.

The “guard” scenario worked when the landlord left the house, and home appliances combined with light fixtures began to simulate the usual routine of tenants, showing potential thieves and criminals that the house was not empty. In the case of illegal penetration, an alarm was triggered, which could not only notify the district with a strong signal of hacking, but also including all household appliances and lighting, to scare off the potential criminal.

By the end of the 1990s, the market situation has improved, since customers have the opportunity to choose between products from different firms and different price categories.

So at what point the home automation systems began to be called “smart houses”?

In fact, the term “intelligent home”, which is so well known to our compatriots, is, in a way, a sort of a sliver of values ​​from the English-speaking world. In the Western sense, there are several definitions of a smart home, depending on the format, scale and purpose of use: it’s home automation, smart home and smart house. Each of them represents a strictly defined market sector.

“Smart homes” are, above all, compact home solutions that allow you to automate routine processes in the house: turn on and off light; Check the condition of electrical appliances, such as an iron, or refrigerator; install video nanny to trace a baby; to regulate the work of climate control systems (warm floors, heating, ventilation, air conditioning, etc.); Do it all remotely, preferably with a mobile device, not from home, but from work, on the road, or in another city, or even abroad.

Today there is no need to think about how to make a smart home? Now available solutions of this level are present in the market sufficient amount. This situation was caused by the technical boom of the 1990s and early 2000s in the countries of the Asia-Pacific region, mainly in China, Vietnam, Malaysia, which were able to provide mass production of relatively cheap in production and available in the retail market as microcontrollers, as well as individual solutions for automation systems, smart homes.

In the world, most commercial and residential properties are equipped with automation systems or “smart home” systems. It is already clear that the automation of management of a whole building gives plenty of advantages, for example, it reduces expenses for maintenance personnel, raises the level of comfort for guests, optimizes energy consumption, water supply and gas supply, reduces the harm done to the environment.